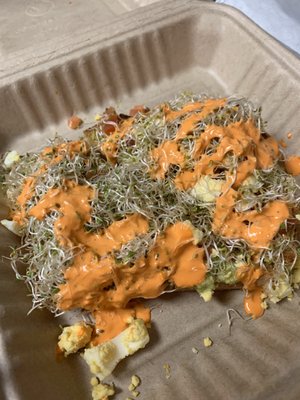 There are no reviews of
Full Belly Deli Midtown.
Be the first to ⭐ Write a Review.

Full Belly Deli was born over a fresh-baked loaf of jalapeño-cheddar bread and two PBRs. Co-owners Eric Barton & Tom Marrin have a few things in common but the strongest bond is their love of a good deli sandwich. More

Full Belly Deli - Reno, 3064 Mill St, Reno, NV 89502 January 4, 2020 Saturday - 6 PM for lunch 1 Adult and a teenager Atmosphere - 5 stars Dinner - 5 stars Service - 4 stars Background - This place has been on my radar for years because of a former co-worker. Now the place was featured on Diners, Drive-In and Dives last night. More

Fully Belly Deli to open in Midtown Reno in old El Salvador restaurant spot. Building permits have been issued for Full Belly Deli, with locations in Mill Street and in Truckee, to remodel the ... More

RENO, Nev. (KOLO) Full Belly Deli in Reno will be featured on Diners, Drive-ins and Dives tonight. "To get that kind of exposure and be part of the Food Network is really cool," says co-owner Tom ... More

393 reviews of Full Belly Deli "I would recommend this place a million times over and over and over again!!! It's hard to pick a favorite cause everything is AMAZING! My husband of course loves the Dirka Dirka. I love the gnar burrito but also the… More

Talk about living up to your name—this sandwich shop is known for serving up inventive sandwiches in huge portions. Their biscuits and gravy burrito is stuffed to the brim with cheese, hash ... More